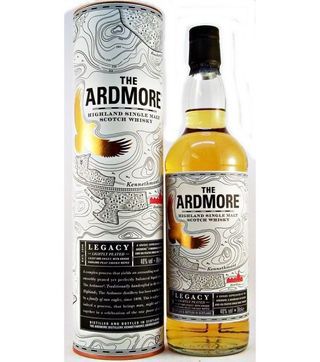 Ardmore
750 ml @ 5000
1 litre @ 7800
Ardmore is a Scotch whisky in single malt whisky subcategory from Kennethmont Aberdeenshire. Beam Suntory is the sole owners of the Ardmore Scotch whisky. This distillery was built by William Teacher’s son called Adam in 1898. He built this distillery so that he could secure the Teachers Highland Cream.   In 1955, the distillery acquired two more stills and later in 1974, they purchased four more still which totalled to eight stills. Ardmore distillery had its own maltings until the 1970s and also a cooperage which they possessed until 1980s. During 2001, the distillery used coal to fire the stills

Its impact for its blends clearly showed that Ardmore had never had an existence as a Single malt. Years later, Ardmore quarter cask was introduced. This whisky has however created a small follow up among other single malts who look up to have are their own bottlings. Ardmore has six produced whiskies which are Ardmore traditional, Ardmore port wood finish 12years and finally Ardmore Triple wood.

The peatiness of the whisky is balanced by a floral or apple lift and requires a long fermentation time in wooden washbacks. Ardmore distillery is among the distilling companies that have had a fire tragedy which caused a huge loss of whisky gallons and infrastructure in the company. Years later there was an outcome of fire which destroyed the steam coils and this took the distillery seven months to remake the coils. An unpeated variant was made after the steam was introduced.

Highlighted below, is the Ardmore whisky brand and its price in Kenya:

Buy Ardmore whisky brands in Kenya at the best single malt whiskey prices from our online whisky store. Enjoy all types of whisky in Kenya. Dial a drink Kenya