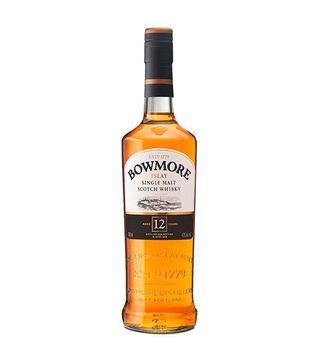 Bowmore 12 years
750 ml @ 7500
Bowmore is a single malt scotch whisky from the Isle of Islay in Scotland. Bowmore distillery was established in 1779 by John Simson. Later on, James Mutter took over even though there are no records that he acquired it from John Simson. In 1925, the distillery was bought by J.B Sheriff & Company and stayed under their possession until 1950 when William Gregor and son purchased it.

During the Second World War, Bowmore distillery stopped its bottling and hosted the RAF Coastal Command when they operated the flying boats. In 1951, James Howart and Stanley P Morrison created Stanley Morrison Limited. During 1963 this firm created Morrison Bowmore Distillery so that they would purchase the Bowmore whisky. In1971, Stanley P Morrison passed on and Brian Morrison took over.

The firm was changed slightly after its reformation and it’s now possessed by Morrison Bowmore Distillers Limited which is owned by a distiller from Japan called Suntory who took it over in 1994. Previously, Suntory had been a shareholder in Morrison Bowmore for a couple of years. Bowmore distillery gets its barley from the island of Islay but due to insufficient quantities released, the distillery imports more barley from the mainland.

Bowmore distillery owns its traditional floor maltings but still imports barley that is already malted from the Mainland. This whisky fermentation is undertaken in the traditional wooden washbacks before it is passed through the four stills which are two wash stills and two spirit stills.

All whisky produced from Bowmore distillery is bottled by Morrison Bowmore and their distilleries at Springburn in Glasgow. Bowmore distillery acquired its water from River Laggan in Islay. This distillery produced different brands which were classified differently. The first class is the standard range which comprised of Bowmore 12years, 15years, 18years, 25years and Old darkest. Secondly, there is the Limited edition which comprised of Bowmore 18years Manzanilla cask, 19years French Oak Barrique and Bowmore 50years. Lastly, we have the Travel retail which has the Bowmore 10years old dark & intense, 15years Golden & Elegant, Bowmore Black Rock and Gold reef.

The following is the Bowmore whisky brand and its price in Kenya:


Here at Nairobi Drinks, we have all whisky brands in Kenya. Visit our online whisky shop today and experience a fast, free and reliable alcohol delivery with favourable prices. You can place via shopping cart, SMS, Calling and WhatsApp on 0714-798-820 or visit our website on www.nairobidrinks.co.ke  Buy Bowmore whisky brands in Kenya and enjoy the best single malt whisky prices in Kenya. Nairobi Drinks offers all types of whisky in Kenya. Dial a drink Kenya