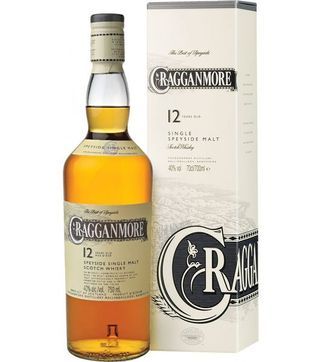 Cragganmore 12 years
750 ml @ 7000
Cragganmore is a Scotch whisky in the single malt subcategory from Scotland. This whisky was discovered by John Smith in 1869. He is known to be the most experienced distiller since he was the managing director of Glenlivet and Macallan distillers. Cragganmore was the first distillery to be constructed close to a railway known as Strathspey.

John Smith died in 1886 and left the company to his son Gordon who was 21years old. In 1901, Cragganmore distillery was refurbished and modified by architect Charles Doig. Gordon passed on in 1912 leaving the business to his wife Mary Jane. The distillery ran on smoothly and successfully until the Second World War where the use of barley was restricted in Britain.    Later on, the company resumed its normal production in 1918 and it was installed electric lighting. The distillery was sold in 1923 to Peter Mackie who shared the possession of the Company with George Macpherson Grants. Cragganmore distillery has three warehouses which were constructed in 1925 which stocked a huge number of casks. Due to the downturn in 1930, the Company was forced to close down for a while.

In 1998 the ageing of Cragganmore has appealed to be growing from one level to another. During 2006 Cragganmore 17years old was released. Previously, Cragganmore was used for blending before Classic Malts was introduced. This whisky uses the lightly smoked malt for its production which is now obtained from Diageo’s central maltings. Diageo Limited is very selective when it comes to barley hence they chose it from varieties of farms from Speyside and Lowland. Cragganmore distillery uses water from Craggan burn minerals for its production.

. The following is the Cragganmore whisky brand and its price in Kenya:


At Nairobi Drinks, we have all whisky brands in Kenya. Enjoy fast and reliable alcohol delivery with the best prices in Kenya by placing your order via the shopping cart, SMS, WhatsApp and Calling 0714-798-820. Visit www.nairobidrinks.co.ke and explore our wide collection of whisky. Buy Cragganmore whisky brands in Kenya at the best single malt whiskey prices from our online whisky store. Enjoy fast whisky delivery Nairobi. Dial a drink.