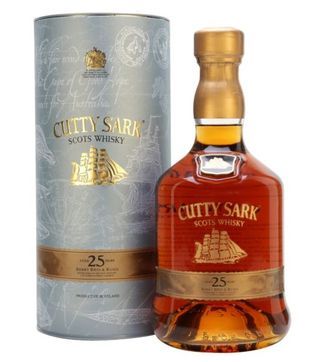 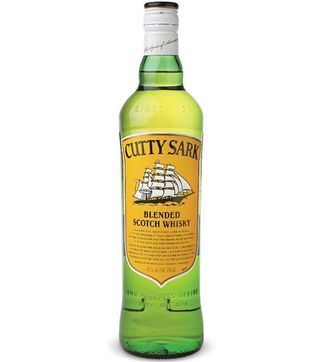 Cutty sark
750 ml @ 2000
Cutty Sark is a Scotch whisky from Scotland and was founded by Berry Bros and Rudd in 1923 at the Glenrothes distillery. The name Cutty Sark was derived from a Scot language Cutty Sark which comes from the River Clyde constructed ship that was called Cutty Sark. The Cutty Sark’s clipper ship was drawn by Cael George Wallin who was a marine painter and it has been the logo of the whisky since 1955.

In 1899, Allied Lyons purchased the Cutty Sark whisky brand and later on Allied Domerg took over. During 1999, Allied Domerg sold the distribution rights to Skyy Spirits. After a short time, Edrington acquired the brand and changed it from Skyy spirits to Remy Cointreau. During 2014, Edrington launched the distribution unit. Cutty Sark Original Scotch whisky is bottled in a green bottle and labelled in yellow.

The brand includes other premium blends which are currently noticed by the age of the youngest blended whisky. Cutty Sark whisky has received several awards from different competitions such as the International Spirit Rating Organization. Since 2008 -2011, the whisky was awarded silver and bronze from the San Francisco World Spirit Competition.

Cutty Sark Scotch whisky is highlighted as part of National Historic Navy by the National Historic Ship. This ship is the only original composite out of the other three ships remaining. In 2007, the Cutty Sark ship was destroyed by fire while going through conservation. During 2012, it was reinstated and was opened to the public. Unfortunately, in 2014, another fire incident occurred and damaged the ship again. This Scotch whisky has appeared in several films, poems and novels. This showing that the whisky is highly appreciated and its growth on the market is highly recognized.

Cutty Sark whisky is the only surviving tea clipper in the world. Back in the days, the ‘tall ships races’ was sponsored by the Cutty Sark whisky. This whisky is among the whiskies that have made their way to space. This happened when Gordon Copper carried the 50ml Cutty Sark for his midnight snack during the 9th mission in space. Despite the United States forbidding Scotch whiskies, Cutty Sark still became very popular hence being one of the best Scotch whiskies in America.

Highlighted below are the Cutty Sark whisky brand and its price in Kenya:

At Nairobi Drinks, we have all whisky brands in Kenya. Visit our online liquor store and explore our library. Place your order today and experience a free and fast liquor delivery. Talk to us via WhatsApp, Calling or SMS on 0714-798-820