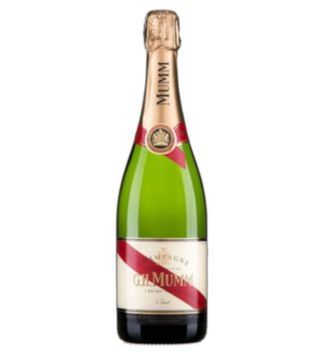 GH mumm cordon rounge brut
750 ml @ 8000
GH Mumm is a champagne brand from Reims in France that was founded by three brothers Jacobus, Gottlieb and Phillip. It was officially launched in 1970. After the launching of the champagne, the three brothers highly focused on how to make the champagne one of the greatest brands in the world. To do this, they first sent the President of the Company Guy Devaux to go to the USA and discover the best place for planting traditional champagne grapes.

GH Mumm Company uses traditional skills to produce fine champagne. During 1983, Guy Devaux produced the first brand and named it Domaine Mumm. In 1986, the President of the Firm hired an architect who designed the Company and formed a chilly state in the basement for good storage of champagne. During 1989, Mumm Napa house manufactured a Cuvee which they named tete de Cuvee in respect of the Guy Dedaux.

In 1999, the champagne house changed its name to Mumm Napa from Domaine Mumm. Following year, Hageman family partnered with Mumm Napa and developed a vineyard estate that was situated at Carneos Region. During 2002, Ludovic Dervin a previous worker at Mumm Napa was recognized as the leading winemaker of the Company. In the same year, Mumm Napa Firm and the San Francisco formed a partnership and in 2010-2012, they celebrated their World Series victories.

Carlos Santana & Ludovic Dervin partnered and invented sparkling wine. During 2020, Mumm Napa was recognized as the best during the Wine Spectator Awards. This Company is currently owned by Pernod Ricard and is also listed as the 4th house of champagne to supply many bottles in 2015. Mumm Napa uses grapes fruits to produce its champagne. In 1904, the champagne house was granted a Royal Warrant as the official supplier of GH Mumm champagne to Queen Elizabeth II. This champagne is among the largest champagne houses in the world. It is distributed in various countries such as USA, UK, Russia, Switzerland, China, Germany, South Africa and other East African countries such as Rwanda, Uganda, Tanzania, Kenya and many other.

GH Mumm has various brands such as Cordon Rouge, Brut and its rare Collection number 1. This champagne is sold in various places such as Restaurants, Lounges and Cabarets. It is also consumed in various occasions and celebrations. GH Mumm champagne is a luxurious drink that is taken by the high society.

Here at Nairobi Drinks, we have all champagne brands in Kenya. Visit our online liquor shop and explore our library. Place your order today and enjoy fast and free delivery of quality drinks in Kenya. You can order via WhatsApp, SMS, Calling and the Shopping cart on 0714-798-820.