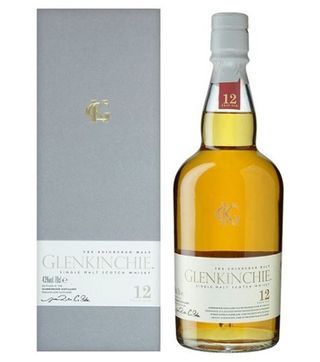 Glenkinchie 12 years
700 ml @ 5500
Glenkinchie is a single malt scotch whisky from East Lothian in Scotland. Glenkinchie whisky was founded by two brothers John and George Rate in 1837 and is currently owned by Diageo. The Distillery is set in farmland and it’s among the six distilleries found in the low region.

During 1953, the distillery was turned to a sawmill after the Rate brothers went bankrupt. In 1981, the distillery was reconstructed under Maj James Greys and production of whisky resumed. During 1989, Glenkinchie stopped producing its own grains and the malting floors were converted to a museum. Glenkinchie whisky became popular after the United Distillers started marketing it under their brand known as Classic Malt.

Glenkinchie Scotch whisky has various brands such as the 12years old, Distillers Edition, 14years old and the rare types 17years old, 20years old and 21years old. The whisky brand is known for having a sweet aroma with a slight liquorice aftertaste and floral notes. Brands like the Distillers Edition is known for having a smell of malted barley with the taste of biscuit, hobnobs and digestives and finally has a toffee finish.

This whisky became a single malt in 1998 when it was chosen ahead of Rosebank as the representative of Diageo’s Classic Malt Selection. Glenkinchie 21years was released in 2007. After some time the distillery built a visitor’s centre where people came to tour in the distillery and got to learn about the production of Glenkinchie whisky.

Glenkinchie whisky used the worm tub mode of condensation and was fermented for utmost 60hours. It also used various casks to age the spirits, for instance, Glenkinchie 14years old used Amontillado Sherry casks while the other single malts matured in bourbon casks.

The distillery sourced its water from Lammermuir hill springs and has two stills wash still and spirit still. Glenkinchie distillery is among the distilleries which have more than one warehouse which holds over 10,000 barrels. During 2013, Glenkinchie 12years old was awarded at the World Whiskies Awards as the Best Lowland Single Malt.

Highlighted below are the Glenkinchie whisky brand and their in Kenya:

Here at Nairobi Drinks, we have all whisky brands in Kenya currently in Stock. Visit our whisky shop and explore our library. Enjoy a fast and free delivery of quality alcohol drinks with the best alcohol prices in Kenya. Place your order via SMS, WhatsApp, the Shopping cart and Calling on 0714-798-820.

Buy Glenkichie whisky Brands In Kenya at the best single malt whisky prices. We offer all types of whisky in Kenya plus free alcohol delivery Nairobi. Dial a drink