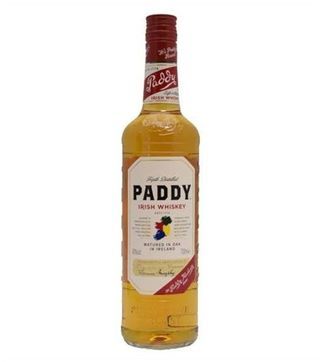 Paddy Irish Whiskey
1 litre @ 4999
PADDY
Paddy is a fine blended whisky manufactured by Irish Distillers at the Middleton distillery in County Cork standing in the position of Sazerac which is a privately held in the American Company. Cork Distilleries Company was discovered in 1867 to amalgamate four existing distilleries in Cork city under the supervision of the group. During 1882, the Firm hired a young best Cork man known as Paddy Flaherty as the salesman of the Company. His distilling skills were distinctive hence making the whisky increase its sales. During 1912, his name became synonymous with this brand and the distillery decided to name the whisky after this sovereign salesman Paddy Flaherty. During the 1920s and 1930s in Ireland, the whisky was supplied in casks from the Company to the wholesalers who would, later on, sell the whisky to publicans. To avoid alteration in quality, the Company decided to bottle their whisky to avoid their casks being diluted by the middlemen. Following the unrequested takeover by the Grand Metropolitan, the Company decided to approach Pernod Ricard and the subordinate of the combination of the French drink. During 2016, a privately owned Company known as Sazerac acquired the Company. The previous owner Pernod Ricard noted that he sold the brand so to simplify their portfolio and allow more targeted investment in other brands.

During that time of the sale, Paddy whisky has the 4th largest selling whisky in the world with sales of approximately 200,000 a litre per annum. This whisky is distilled thrice and aged in oak casks for up to 7 years. As compared to other Irish whiskies, Paddy contains modified low pot still content and a high malt content in its blend. Paddy whisky contains aromas of oily and fresh with cereal grains, floral notes are sweet and of medium body with cereals of toffee, a rosewater note with vanilla and a little butterscotch. Finally, it contains a spicy, and dry finish with a little black peppery and oak. It is noted that Paddy uses an unusually high proportion of malt whisky. This triple distilled whisky is one of the best whiskies from County Cork and its supplied all over the world in countries such as the UK, USA, Russia, Tokyo, Uganda and many other countries. Highlighted below is the Paddy whisky brand with its costing in Kenya:

Paddy whisky and other whisky brands such as smoke head, Harrington, Glencadam, Speyburn, Iwai and many others are currently in stock at Nairobi Drinks. Place your order today via the shopping cart, SMS, calling and WhatsApp on 0714 798 820 and enjoy a free, efficient and reliable delivery of any alcoholic beverage with the most affordable pricing in Kenya.