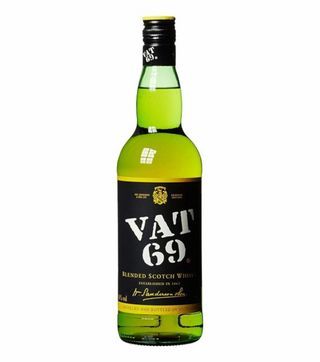 Vat 69
750 ml @ 1800
1 litre @ 2000
VAT 69 is a blended Scotch whisky that was founded by William Sanderson and sons limited from South Queensferry in Scotland. William Sanderson started apprenticing with spirituous liquors and wines producer Mathew Buchanan when he was 13years. After a short while, he owned his own Company that manufactured whisky and liqueurs.

During 1880, William Mark partnered with his father and advised his father to produce various whisky blends. During 1882, one hundred barrels of blended whisky was produced by William Sanderson who leased some experts to taste the whiskies. Out of the one hundred, the VAT with number 69 emerged the best and since then it provided a brand name for the whisky.   Previously the whisky was stored in port bottles. In 1884, Glen Garioch distillery was acquired by Sanderson which was located at the centre of a barley field. This distillery was created to only ensure grain whisky is delivered. Sanderson ensured that new blended products were always released because Diageo controlled a huge amount of the production that had a big influence on the distribution of the competing firm.

Sanderson partnered with Bell and Usher established a firm to manufacture grain whisky which exists up to date as North British Distillery. Sanderson obtained malt from Royal Lachnagar distillery. After Begg passed on Sanderson took over and became the director of Begg’s distillery. Sanderson firm joined with Booth’s distilleries which later partnered with Diageo in 1935. VAT 69 is not a barreled malt but it’s a blend of utmost 40 grains and malt whiskies. This whisky has no age statement.    VAT 69 has different brands which are VAT 69 Reserve de luxe Scotch and VAT69 Finest Scotch whisky. This whisky has a very fresh, light and little spicy taste. This whisky is popular in various countries like South Africa, India, Argentina, Uruguay and many more. The Logo used on VAT69 is a copy of the writing on the original cask.

The following is the VAT 69 whisky brand and its price in Kenya:

At Nairobi Drinks, we have all whisky brands in Kenya such as Johnnie Walker, Yamazaki, Glenfiddich, Macallan, Caol Ila, Auchentoshan and many more. Enjoy a fast, free and reliable alcohol delivery with the best alcohol prices in Kenya. Visit our whisky shop and explore our extensive library. You can order with us via the Shopping cart, WhatsApp, Calling, SMS on 0714-798-820