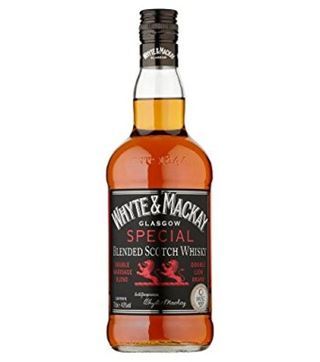 Whyte & mackay
750 ml @ 2500
Whyte & Mackay is a blended scotch whisky from Glasgow in Scotland. It was discovered by James Whyte and Charles Mackay as a bounded warehouseman & whisky merchant in Glasgow during 1882. Their first whisky was named after them Whyte & Mackay which was successful in the UK and other various English countries.

After the Second World War, the firm concentrated on home marketing. In 1971, Hugh Fraser SUITS group acquired the brand and in 1998 Whyte & Mackay was acquired by Brent Walker and was later sold to American Brand which is currently known as Fortune Brands. During 2001, Whyte & Mackay was sold to fortune brand management.

In 2011, Whyte & Mackay created an import firm in the United States to handle the position of the whisky in the US market with products like Cluny, Dalmore, Glen Sale, Jura, Mackinlay and many more whisky brands. After some time, the Firm appointed Jorge Gutierrez who was the former Bacardi executive as the President of Whyte & Mackay Americas.

The Company sells Blended Scotch whiskies, Liqueurs, Vodkas and Single malts. In 2006, Gold Quality Award was awarded to Whyte & Mackay during the World Quality Awards. During 2009, Whyte &Mackay 30years old was recommended as the best-blended whisky in the world. Formerly, the Whyte & Mackay whisky brand-sponsored Edinburgh club Hibernian during the Scottish Premier League.

Archaeologist E. Lee Spence recovered the Whyte & Mackay bottles from the shipwreck that sunk in Lake Huron in 1913. During 2010, Whyte & Mackay Company sold two bottles of 64year old Dalmore Trinitas malt for a lot of money and the chairman stated that that was the last whisky to be produced. This whisky brand is currently owned by Philippines Company known as Emperador Incorporate. Whyte & Mackay is a self-branded whisky which holds about three percent of the UK whisky market.

The following is the Whyte & Mackay whisky brand and its price in Kenya:

Here at Nairobi Drinks, we have all whisky brands in Kenya currently in stock. Visit our online liquor store and explore our library. Enjoy a free, fast and reliable alcohol delivery with favourable prices in Kenya. You can place your order via WhatsApp, Calling, the Shopping cart and SMS on 0714-798-820. Also, visit our website at www.nairobidrinks.co.ke