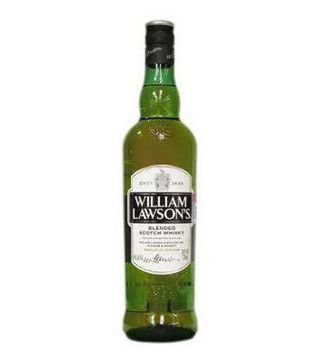 William lawson
750 ml @ 1800
1 litre @ 2000
William Lawson is a blended Scotch whisky that is owned by Bacardi Limited and was founded in 1849. William Lawson is named after its owner who was called William Lawson. This Scotch whisky is considered to have a high amount of single malt and grain whiskies. William Lawson started working in Dublin City for the E&J Burke’s distilling Company as the general manager in the export department and later on purchased it in 1881.

The trademark of William Lawson was recorded in 1889 and later on, in 1963 Clan Menro Whisky Limited purchased it. During these events, William Lawson & Company relocated from Dublin to Liverpool. William Lawson Company was launched in 1969 and later the Macduff distillery which supplied William Lawson’s fingerprint whisky was established.

Lawson Scotch whisky does not use peated whisky during its blend. The brand also ensures the malt from Macduff distillery has a good complex for William Lawson and also good flavour. This brand ferments and distils their Macduff single malts very fast and later blends' the spirit with other various whiskies to form the William Lawson Scotch.

In 1993, Bacardi Limited acquired Martini & Rosso giving it to the Macduff distillery and William Lawson brand. From then till 1998, the Firm had no other distilleries but this changed after five distillers from Diageo and John Dewars acquired the brand. Since William Lawson was purchased by Bacardi it highly developed in the market hence having high sales. This Scotch whisky was supplied in various countries such as Portugal, Mexico, Spain, France & Russia.

William Lawson has various brands such as the 12year old Scottish Gold, 8year old, 13year old Bourbon Cask that is super spiced and is also vanilla flavoured. During 2013 and 2015, William Lawson was awarded a gold medal at the Scotch Whisky Masters in the standard category of blended whisky. In 2013 and 2014, it was awarded a silver medal during the International Wine & Spirit Enthusiast Competition.

Below is the William Lawson whisky brand and its prices in Kenya:

Here at Nairobi Drinks, we have all whisky brands in Kenya currently in stock. Order today and experience a fast, free and reliable delivery of quality alcohol drinks with the most favourable prices in Kenya. Visit our online whisky shop and explore our broad collection of various whiskies. Place your order today via the Shopping cart, SMS, WhatsApp and Calling on 0714-798-820.